Dedicated to the few who messaged on New Year’s Eve.

2011 was a story I don’t know how to tell. It’s a year that had so many structural positives, countered by surface negatives. Perhaps it’s best defined by what others have said.

In the early summer, I was ‘strange’, ‘sick’ and ‘damaged goods’. Thanks. In the mid-summer, I was an expletive abomination. Consequently, in the late summer, I was branded a defeatist.

Victimisation does arise sometimes. Not because it is wanted – if there’s a brand of people who don’t want to be happy, this author is not one of them – but because it’s a way of dealing with the various angles of attack and the after-effects that cannot be disguised.

November showed a shy being far out of his depth. I wish it was different, but time, inexperience, grief (and so forth) all take their toll. Sometimes, all that’s needed is a little time for the right things to overwrite the wrongs; I never seem to get it.

There’s a saying that good always comes out of bad. Desperation is not always detrimental. It can provoke change, and make things happen. In 2011 it brought new company up North, an introduction to nightlife, and a watertight relationship with my fabulous sister.

It also brought unusual decisiveness. In the late summer, out of nowhere, came a career opportunity that would involve a move to a new city. Hence, I find myself there. A cool apartment; a new life; a new chance. There’s been positives on the academic front too, doggedly defying occasional apathy. There’s some pride at making it that far, but there’s such a long way to go.

The man up in the moon is shining
Good fortune down on me.

The moon is such an apposite subject for some of my favourite music. It’s mystical and distant; powerful and constant; an introvert and extrovert; a shadow and a presence. There’s something about its solitariness that’s arresting and romantic. Perhaps that’s why it captures our imagination.

Even if one has everything he desires, he can still find himself a lonely or lost being. There’s no single definition of loneliness, and no single cure. Is it because life is missing accomplishment? Is it because there’s a deep-engrained desire to want exactly what one hasn’t got, or what somebody else has got? Is it because one doesn’t make enough effort?

Or is it because, watching from up high, it genuinely is a lonely world, and the fallacy that we are all more connected than ever just spikes our expectations of ourselves until we never feel further apart? There’s something in this beautiful song about dreaming of the unattainable. I wonder if I make that a speciality. 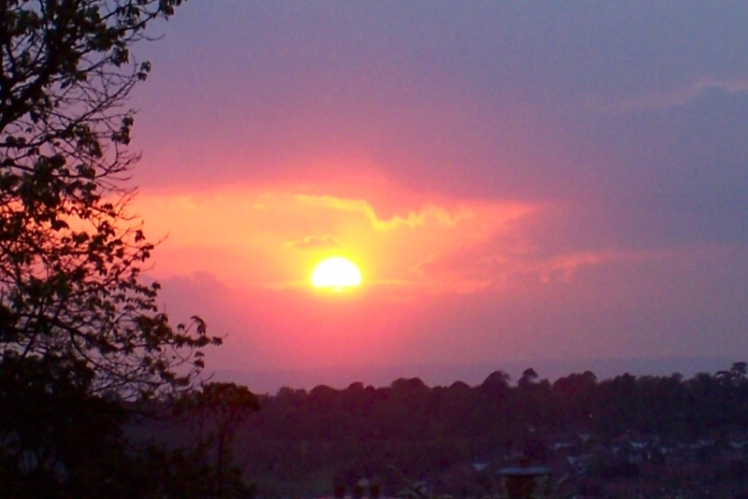 In a solitary strike of ire, I criticised models of friendship last year, and with good reason. Why would people flatter themselves as selfless, all-encompassing, omni-sociable beings if they really couldn’t care less?

Despite this, I celebrate solid friends – real people, brilliant minds, dependable hearts – the sort that, ten years ago, I could only dream of. That is why I’m here; I believe it will be alright. Making poetry recordings for Radio Santa Cruz in 2011 was a different and amazing way to bond with people. It combined introspection, inspiration, experience and total humanity.

As a disastrous teenager, I always used to wonder how I would ever go on to become a normal person. The moves I’ve taken ever since have almost always threatened to keep me away from that, until recently. At the end of 2010 I sought further life experience. 2011 brought some, and was enriching in many ways. I could even return to Geneva and embrace the company of old.

If only I could take these slow developments (pace Prufrock) and try the last decade again, coming away with fewer failures, fewer regrets, and with stronger mental gumption. What others choose to say to me and think about me, I cannot prevent, but some more belief rather than a chilling satisfaction at watching waves crashing overhead would be a real victory.

I fell in love with the fabulous Green Children in the summer through this yearning track that tapped into this very vulnerability. They are everything I could only wish to be: a beautiful pair, mystical, charismatic, lyrical, and philanthropic. They have fantastical belief and an enchanting fairy-tale delicacy to their plaintive sound. They find a depth of collective longing and belonging in this ambient melodic pop. The song reflects the most intense memory of 2011 when princesses and fairy-tales emerged, then remained fantasy, and out of reach. I have such fire for positive things – Love, Life, Longevity – but it’s often made to freeze rather than burn.

I’m not so far away. It just still feels far away a lot of the time. There’s a very fine line sometimes between success and failure; acceptance and rejection; the possible and the impossible – a fine line that creates a chasm in reality.

And a lot of 2011 has been spent asking why, in a sporadic stream of regret and doubt. We uphold liminal boundaries of our own existence that are sometimes just too pressing and too tense. Do we not get along with ourselves better when we have less time to dwell, think to ourselves, and talk to ourselves?

So as, that Greeke Sage, seeing a Young man privately retired all alone, demanded of him what hee was doing? who answered, he was talking to himselfe. Take heed, quoth he, thou talke not with thine enemie.

I can only hope that viewing me is like how I view my work (a connection I’m never far away from any more). Take a little time to see beyond the awkwardness, and there might be a hint of something decent and worthwhile underneath it all.

There’s little that chills my spine more than the introduction to this song by the amazing Justin Elswick (aka Sleepthief). It’s not the perfect poignancy of Skimming Stones, but the two are intrinsically related – sibling songs. Longing and loss; absence and aftermath; the missing and the memory. Again, the title captures me. Self-sovereignty is governed by knowing. Being held in the void of uncertainty can bring the very best from us, and yet leave us in the worst predicaments.

I always think knowing is easier than not-knowing; self-questioning always leaves room for doubt. But sometimes, things happen, engrained into the fabric of life. There aren’t always reasons for everything, and actually that’s alright.

In 2012, I hope I’ll see those dearest to me treat themselves well, believe in themselves, and not blame themselves if times get tough. And if they’d like to keep visiting and sharing this little repose with me, they will forever be welcomed with open arms.