Despite his position as commander-in-chief of the New Model Army, Fairfax has for long periods been one of the most understated figures of the seventeenth century. Papers delivered at this event from literary, historical and even cinematic perspectives sought to readdress areas of his life, family, military capability, and posthumous reputation that have been neglected and/or misrepresented in modern times.

The following summaries are collated by subject area rather than the conference schedule. The proceedings were subsequently published in England’s Fortress: New Perspectives on Thomas, 3rd Lord Fairfax (Ashgate, 2014).

Philip Major (Birkbeck) opened proceedings by speaking on Fairfax’s poetics of retirement. With the theme of solitude clearly evident in literature of the early 1650s, particularly in the translations of French libertine poet Saint Amant, it is clear that Fairfax’s manuscript poetry engages with this tradition and becomes inherently valuable as a source in determining his post-retirement reflections. The verse reveals the tension between solitude and retirement, which must be differentiated. The continuing activity of godliness and the state of sufferance shows an engagement and self-reflection that cannot be misconstrued as straightforward withdrawal from service.

Rory Tanner (Ottawa) examined the joint devotions of Fairfax and Andrew Marvell, who became a language tutor for the general’s daughter in late 1650. Marvell’s commendatory poem on Robert Witty’s translation of the Popular Errors, composed early into his tenure at Nun Appleton, reads as the sort of pedagogy on translation that Fairfax himself followed in his own expansive translation efforts. His Psalters reflect the varied and difficult preoccupations that were encountered during retirement at Nun Appleton and show the conscious decomposition of the perfect pastoral construction of retreat.

Keith McDonald (Leicester) completed the literary triangle by arguing that Marvell’s three poems on Fairfax’s estate offer an important witness to the private man following his retirement, an issue rarely addressed in biography. Property and dominion become a central theme in Marvell’s verse on Fairfax by which to determine the active conscience of the individual. But Marvell distorts this in perplexing ways, including geometry and through the use of glass, to suggest that crisis was never far away, and that there could be no means of legitimating the choices that Fairfax made. Such was the moral cost of revolution.

Jacqueline Eales (Canterbury) argued that the lasting impressions of Anne Fairfax, substantiated in the recent Fairfax biography, may have been misleading. Though it is evident that she hindered Fairfax’s participation in the execution, the reports of her interjection at the trial of Charles contain discrepancies and are not entirely reliable as evidence. Moreover, the unsightly image of Anne that has long humoured historians and students (below, left) is also dogged by uncertainty. The formidable engraving that is attributed as Anne Fairfax could have been derived from the wrong subject, casting doubt upon whether we have ever seen a genuine portrait of the general’s wife.

John Callow (Marx Library, Clerkenwell) analysed Fairfax’s role as governor of the Isle of Man, which had a separate constitutional background and language, and which Fairfax himself never visited. The Isle had become subject to a form of proto-absolutism, heavily militarised and fortified at a considerable cost to its people. Fairfax’s tenure, with its tripartite system of government, showed both sense and prescience to take the sting out of civil conflict in ten years. Fairfax’s reputation as firm but fair is upheld by his sympathetic response to petitioners, and by his accost of James Chaloner, his own appointment as Deputy Governor, who pushed for power in 1658. 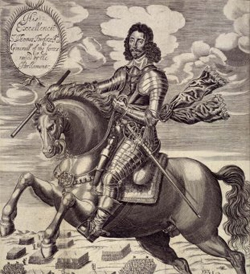 Richard Nash (Indiana) spoke of Fairfax as a horse-breeder, arguing that another means through which Fairfax strove for improvement was in his determination to breed the perfect specimen. Horse-breeding had been performed for others’ benefits, and had clearly been distinguished as a duty for war rather than sport – though this royal-approved sport had military benefits. The Renaissance-inspired geohumoralism meant the importation of hot-blooded horses, which, for Fairfax, could then procreate the thoroughbred. After tracing the history of the Jockey Club back through the eighteenth century, it was identified that Charles II’s Spanker (1670), bred by Buckingham, derived from Fairfax’s line.

Andrew Hopper (Leicester) spoke on Fairfax in modern literature and film, conceding that the domination of Cromwell and the underwhelming presentation of Fairfax reflect wider changes in popular political culture. In nineteenth-century recollections, Fairfax is remembered for the abuse suffered at the hands of Cromwell, while today he is little more than a Yorkshire typecast. The most compelling presentation of Fairfax is found in David Caute’s Comrade Jacob (1961), though the adaptation, Winstanley (1975), perhaps favoured accuracy for Fairfax over the film’s eponymous hero (to Caute’s dismay). The over-dramatized To Kill a King (2003), however, exemplifies the liberties with history that are now being justified by ‘artistic license’, which is grossly inadequate as the public use film as the new-wave consumption of history.

Ian Atherton (Keele) presented on remembering Fairfax’s battlefields, showing how towns and communities built commemorative traditions in memory of civil war events. Dutch painters had petitioned Parliament to present the sieges in painting, showing the varied texture of civil war memory in the popular imagination. Because of the focus on the survivors following the conflict, commemorations were rarely marked until the 18th century. The Taunton Anniversary Song commemorating 11 May, which ranked above Christmas Day, emerged as late as 1791. However, Fairfax features little among them: partly because of providence; partly because of Presbyterianism; and partly because his reputation gradually disappeared outside of Yorkshire.

Robert Barcroft (Keele) argued that Fairfax’s overall reputation as military strategist has remained underdeveloped because of the lack of attention paid to his engagement in sieges as well as battles. Fairfax had acquired a sound tactical knowledge from time spent on the continent, and he regularly sought advice from a council of war. Fairfax’s breakout from a desperate situation at Bradford prevented the collapse of the Parliamentary war effort, while aggressive tactics employed during 1645 and beyond owed to siege warfare. The New Model Army’s efficiency and discipline, which owed to Fairfax’s insightful management, mostly minimised the collateral damage to the civilian population and gained public support over the ill-disciplined Royalists.

Mandy De Belin (Leicester) concluded the papers by examining the landscape of the battle ahead of a trip to Naseby. The war had three participants at this stage, it was argued: two armies, and the north Northamptonshire landscape. Owing to the high clayland at Naseby, geography helped to determine the battleground. The Royalists approached from Market Harborough, while Fairfax was happy to consolidate his position and allow an approach. He negotiated a position with Cromwell that would be advantageous but not off-putting to the assault. The expansiveness of the area during battle is difficult to visualise now, owing to the conversion of the ground to pasture for arable farming.

Thereafter followed a segmented Battlefield Tour, which was conducted by members of the Naseby Battlefield Project. Aided by the precise direction of the team, delegates were able to compare the precise vantage points of Rupert and Fairfax to determine the subtlety of the Parliamentary advantage. A demonstration of weaponry and musket-fire showed that military historians can overestimate the time of weapon-load and discharge, while the team explained how clear archaeological evidence helps to determine movements across the expansive grounds. A further resource centre is planned over the next few years, which will add historical, cultural and academic gravitas to the Project.

Many thanks to the conference organisers, Andrew Hopper and Philip Major; to those who helped out over the weekend; and to Bateman’s Brewery for a welcome donation of Dark Lord beer, which added a hearty note of celebration to a weekend of studious commemoration.

4 thoughts on “The Fairfax 400 Anniversary Conference”