The Early Modern Career, University of Birmingham, 2nd May 2014

The British Academy sponsored Early Modern Career event at the University of Birmingham was a creative assimilation of early modern livelihoods with current notions of the career and the challenges contained within. The day successfully explored the intellectual and institutional contexts of the early modern career, from matriculating young scholars to the renowned writers and politicians of the age.

In particular, the exploration of networks as a vibrant and synchronous concern of past and present was brought alive by the use of Blendology, new touch-sensor technology that allows conference delegates to exchange details and record their interactions with others throughout the day.

The day’s opening panel focused on the early career experience, from fledgling scholars at university to the breakthrough years of prominent Renaissance authors.

Sarah Knight (Leicester) discussed early-modern student life, which was defined by its sartorial regulations and a fiercely competitive, fractious environment. Roger Goad (1538-1610), who complained about the neglect of religion at King’s College in 1565, was identified as a typically didactic provost. As vice-chancellor in 1595, he established a strict dress code and banned pastimes including football and fishing to improve scholarly practice. We were also invited to think about what the lasting impact of student experience on a literary career might have been, with John Milton notably describing himself in An Apology (1642) as being ‘vomited out thence’ from Cambridge.

Gabriel Egan (De Montfort) investigated some key questions surrounding Shakespeare’s notoriously hazy early career. Because the early prints of Shakespeare’s plays were all collaborative efforts, attention is drawn to the authorial properties of plays that are considered to be among the first of Shakespeare’s oeuvre. Using computational stylistics to stratify The Two Gentleman of Verona, a play normally recognised as one of Shakespeare’s first, Egan argued that the famous playwright may have initiated his career either through co-authorship or by refurbishing other authors’ plays.

Concluding the panel, Mary Ann Lund (Leicester) borrowed from an organisational theorist, Stephen Barley, to suggest how transposed aspects of Donne and Burton’s careers could represent current career preoccupations. Donne was an expert in shaping his career retrospectively, while Burton was fixated with the importance of publication. And while neither found a linear route to the career that would define his legacy – with Burton acting on his burgeoning interest in sickness, for example – the model of indirection in both cases served a rhetorical purpose that would eventually help to define their autonomy.

The second panel addressed a wider variety of career trajectories from the Tudors through to the Restoration whilst remaining mindful of what past experiences can offer to the twenty-first-century early modernist.

Andrew Hopper (Leicester) explored the unexpected career movements of Adam Eyre, an otherwise archetypal Yeoman of the mid seventeenth century. Despite his Godly learning, Eyre lived an extravagant lifestyle and has been described as ‘England’s worst Puritan’. But Eyre’s diurnal, which details his daily expenses between 1647 and 1649, has seen him too easily categorised by social historians over such a small sample of his life. A career as a civil servant followed in the Strand during the interregnum, demonstrating the social and geographical mobility required to adapt to the political dynamism of the mid seventeenth century.

David Roberts (Birmingham City) considered the trajectory of acting careers following the Restoration and how the progression of performance careers compares with current experience. Though only Killigrew and Davenant were issued with royal theatre patents in 1660, opportunities became available to actors because the two took different approaches to their recruitment: the former seeking experienced performers; the latter opting for youth with a diversity of backgrounds. Forging a career then meant preserving roles for longer than it may have seemed possible. Thomas Betterton’s involvement with the Restoration theatre scene lasted beyond fifty years, during which he played the young Hamlet, Macbeth and the aged Lear within a five-year term. Betteron, perhaps the first to have a real acting career, shows how a ‘career’ is (and was) defined by the person.

Jonathan Willis (Birmingham) examined the career trajectory of Tudor musicians during a period when music was ubiquitous but opportunities for professional musicians were rare. Cathedrals provided the majority of the salaried positions, while there were also opportunities in theatre. However, socially and geographically mobile musicians were frequently regarded as itinerant and dishonest, especially minstrels and other peripatetic players. The career of Thomas Whythorne (1528-1596) demonstrates the versatility required by the Tudor musician, but also the resulting concerns about identity that often arose. Credited as providing the first autobiography in English, Whythorne pledged to teach music, but had to fend off the advances of a young woman who propositioned him. Though he undertook several private teaching roles, he showed reluctance to be seen in a position of servitude and expended much energy defending the dignity of his profession. 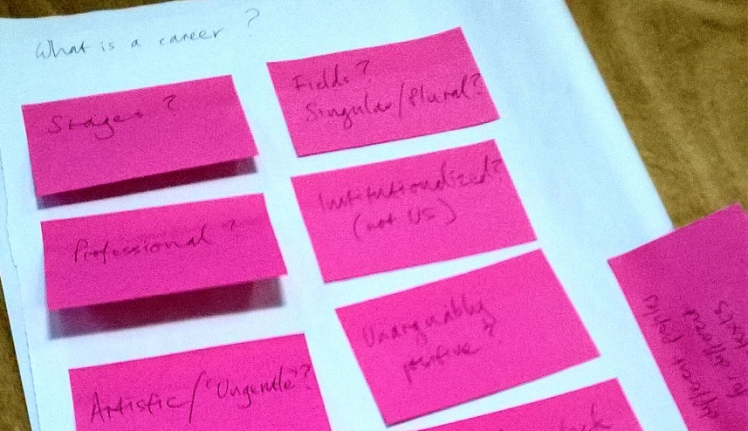 The final panel addressed the representations of fictional careers alongside the textual moments or landmarks that defined careers in reality.

Eoin Price (Shakespeare Institute, Birmingham) used a little-known Caroline tragedy, Appius and Virginia (1627), to demonstrate the fantasies and anxieties of social elevation inherent in early modern drama. A central concern of co-author John Webster was the protean nature of the player, who must adapt from a monarch to a private man between performances and sometimes even within performances. Heywood, meanwhile, was a playwright of plebeian values. This resulted in a collaborative effort that was concerned with how ideas of nobility are appropriated and how public duty was levelled against political withdrawal.

Paul Brown (De Montfort) examined the ‘careers’ of George Wilkins, whose short two-year literary involvement included an uneasy collaboration with Shakespeare over Pericles when the theatres were closed. Wilkins needed diversification, and was listed in 1610 as a ‘poet’, but by then his publishing career appears to have ended. A long legal history as the perpetrator (and occasional victim) of crime reveals a colourful character who may have kept a brothel and coerced women to steal for him. As one of the more shady Shakespearean collaborators, the question arises as to why this literary career ended as suddenly and abruptly as it began.

Philip Tromans (De Montfort) investigated how the career of Richard Hackluyt was reflected in the intellectual and physical properties of his Divers Voyages (c. 1587). The designs for the volume were gathered during a trip to France, where Hackluyt gathered intelligence on the New World. But the production of the volume, as a guide that could be unstitched, provided an eclectic blend of scholarship and customisable practicality that allowed readers to contribute their geographical knowledge and develop what Hackluyt had started. Such innovative formats are under threat of becoming overlooked in the new field of digital humanities, Tromans suggests, which currently lacks such tools with customisable and constructionist formats. 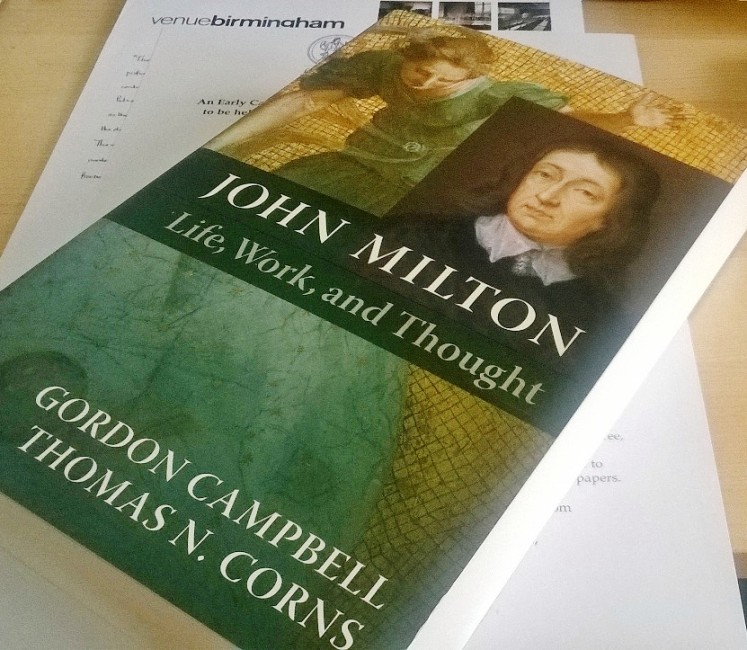 The concluding plenary by Gordon Campbell (Leicester) was an absorbing and lighthearted examination of ‘Milton’s careers’ in the heady context of mid-seventeenth century England. The idea of the career as a route to self-fulfilment is anachronistic for early modernity, Campbell said, when most men followed the trade of their fathers and ambition was considered highly suspect. Circumstances proved a little different for the likes of Donne, who turned to (or may have paid his way into) the church as a last resort.

Academic life, made less desirable by obligations of celibacy, was generally undertaken ahead of marriage, and we cannot assume that Milton sought this, despite his scholarly inclinations. Milton also did not seek preferment, which begs the question of why he was recruited by the government as a Latinist when no track record of his ability existed. Campbell suggested that Milton could have been related to John Bradshaw, which would explain both his entry into, and exit from, government.

During Milton’s decade-long career in government, he is traceable in some detail for all but five weeks (to Campbell’s exasperation), which is a stark contrast to the man who keeps a low profile following the Restoration. For the likes of Donne and Milton, then, it makes little sense to define a sense of ‘career’ for them just because they encouraged us to view their lives as a greater purpose.

With opportunities provided to discuss the wider implications of these panels in differently composed roundtables, there was plenty of useful cross-historical debate about how we define and structure a career in early modern studies and which elements of early modern professional life can be identified as being prevalent today. The day proved an exercise in both research and development, and emphasised the sort of skills that are integral for both in the all-important quest for accomplishment.

Many thanks must go to the organisers at Birmingham, Tara Hamling, Tom Lockwood, and Stephanie Appleton. As somebody who remains precariously balanced on the periphery of early-modern academic life, this was a valuable event that surfaced at the right time, and I hope to be able to demonstrate its benefits in due course.

Audio recordings of all the performances are available via Back Door Broadcasting.