Held at the Birmingham and Midland Institute in Birmingham, the 51st British Milton Seminar provided an eclectic range of papers, ranging from the stylistic and sensory features of Milton’s verse to literary influence and critical appraisal.

The opening paper, delivered by Peter Auger, sought to reappraise Milton’s use of Guillerme de Salluste Du Bartas. The influence of Du Bartas, via Josuah Sylvester’s English translation of the Devine Weekes and Workes, was evident from Milton’s early verse, notably his Psalms. To date, commentators have largely attributed this influence to convenient proximity, with the text available near Milton’s birthplace. Auger wishes to reassess the bases for this influence. Du Bartas was more than merely a source-book, he contends. His work had an established presence in the English literary landscape by the mid-1640s, and it allowed Milton to adapt common language into his own specific contexts, such as the catalogue of ailments provided in Book XI of Paradise Lost.

In a provocative paper, Matthew Jordan tackled empiricalism in Milton and his critics. His central target was Quentin Skinner, who becomes a polarising figure, Jordan argues, with benefits and detriments to Milton scholarship in a distinguished career of political and conceptual theory. Jordan takes particular umbrage with Skinner’s curt dismissal of renowned French theorists, such as Derrida. He also calls into question some of Skinner’s methodology, such as the campaign of ‘illocutionary force’, and how lucid or broadly effective this has proved to be. ‘Forensic Shakespeare’ proves the issue of style over substance, Jordan suggests – with Hamlet a particularly striking demonstration. Milton is, to Jordan, a ‘gifted synthesiser’ of various schools of thought and traditions, which is downplayed by such diffuse approaches.

John Creaser began the afternoon session with an excerpt of his new work on Milton and rhyme. Milton was pilloried for his attempts at rhyme, by John Dryden and Samuel Johnson amongst others, but deserves greater attention in this stylistic feature of his work, Creaser believes. The paper began with a demonstration of the phonetic potential for rhyme in English, showing how long and short vowels and consonantal patterns helped rhyme to “give destiny” to its lines. Rhyme for Milton was not always strained or forced as critics have long supposed, Creaser suggests. Milton brought creative rhyme to the fore in Lycidas, and later turned his emphasis towards near- and half-rhymes in Paradise Lost and other later works.

Finally, Briony Frost discussed the role of divine thunder as a cause of sonic trauma. Sound, which accentuates the antagonism between God and Satan, becomes especially prevalent for the blind Milton, who (it may be supposed) acquired heightened ability in his other senses. The issue is packed with questions, however: how does thunder leave scars when even early modern meteorologists recognised that lightning was the more damaging? Moreover, how can we be sure that ‘thunder’ is not a reference for both, or an abbreviation for thunderbolt? For Frost, the capacity of sound to impact upon human behaviour, which she amply demonstrated with physics, is heightened by the context of divinity. Furthermore, the distinction between the two meteorological phenomena could be explained by the fact that thunderbolts damage physical targets, which the angels are not. Consequently, Ford suggests, Milton’s sonic soundscapes offer the capacity for divine annihilation. 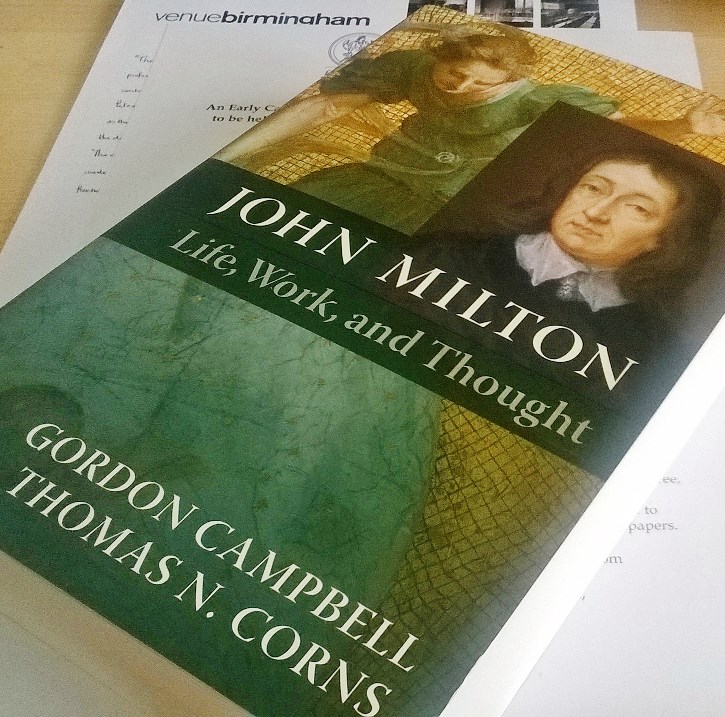 Just 48 hours later, Tom Corns presented on Milton and America at the Mercers’ Hall, City of London. The basis of Corns’ lecture emerges in the early pages of the Life, Work, and Thought biography co-written with Gordon Campbell. Milton was scorned by Samuel Johnson in the mid-eighteenth century for his supposed ‘contempt’ of authority, but Milton’s support for republican government has helped to shape the foundations of modern democratic thought. By 1714, all of Milton’s published works were available in Yale, and his work has proved influential for revered American statesmen such as Benjamin Franklin and Thomas Jefferson.

Yet, for all Milton’s influence stateside, the process was reciprocal. Evidence shows that Milton was shaped by American experience, and particularly by characters such as Roger Williams. Williams, a radical advocate of toleration in Rhode Island, made two significant trips back across the Atlantic in the 1640s and 50s. During the first, in 1643, he took the opportunity to challenge Presbyterian mobilization by publishing The Bloudy Tenent of Persecution for cause of Conscience, just as Milton was also engaging in prose. Williams’ second return, between 1651 and 1654, provides closer evidence of association between the pair, as they report sharing language expertise with each other. For Corns, this chronology corresponds with a distinct shift in Milton’s thought. By 1659, Milton was ‘firmly down the Rhode island road’, he says, as American influence provided a subtle component of his ideological transformation.

In the twentieth century, Milton has increasingly become a subject of scholarly rather than of creative interest. A notable exception to this, however, is Peter Ackroyd’s unusual ‘what if’ hypothesis on Milton’s life, published in 1997. What if Milton had fled to America to escape persecution and had attempted to fulfil his destiny elsewhere? It’s not wholly fanciful, Corns reminds us. It may have been a realistic option, instead of hiding in seclusion until the heat of Restoration ire blew over. Corns defends the depiction of Ackroyd’s Milton, who, with spiritual life and vision, engages in sexual exploration before eventually taking ‘his solitary way’.

Milton’s stock in America is still powerful, reflecting the respect that remains for him centuries after his death. There are more original editions in Illinois Urbana-Champaign alone than in all the research libraries in the United Kingdom, Corns reminds us. Milton, he concludes, has indeed travelled well.