Ekphrasis is a common feature of Andrew Marvell’s Interregnum writing. But before serving his Cromwellian verse between 1653 and 1658, the perspectival features of viewing and reflection combine in a remarkable way in ‘Upon Appleton House’. 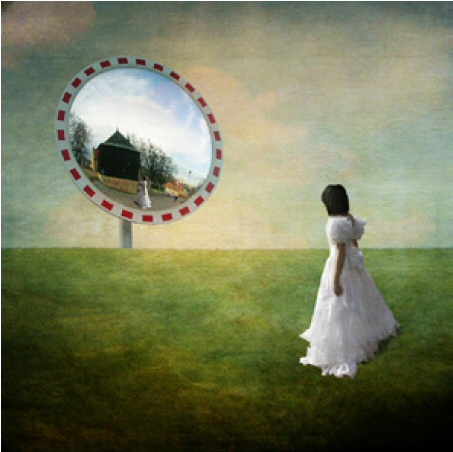 Marvell’s portrayal of the private Lord Fairfax relies heavily on the construction and reflection of the self through private property and its (often vitrified) representations.

Note this sequence is in the meadows.

They seem within the polished grass
A landskip drawn in looking-glass.
And shrunk in the huge pasture show
As spots, so shaped, on faces do.
Such fleas, ere they approach the eye,
In multiplying glasses lie.
They feed so wide, so slowly move,
As constellations do above.

Then, to conclude these pleasant acts,
Denton sets ope its cataracts;
And makes the meadow truly be
(What it seemed before) a sea…

Here, the mirror is not only counterposing the real and artificial; in the interplay of ‘glass’ and ‘grass’, it is also freezing time, nature, and a pictorial moment.

Marvell’s verbal design captures and frames the visual memory, while simultaneously leading the reader through the visual experience by locating the art in its rightful context.

The threatening Levellers, the subject of this extract, appear marginalised in the world of art, ‘shrunk in the huge pasture’. Marvell seeks a moment of peace through the mirrored picture, or at least to present the calm before the storm.

Paintings on mirrored glass were fashionable in the mid-seventeenth century. But just as Hamlet holds ‘a mirror up to Nature’, so Marvell’s examination of the varied and refractive properties of reflection demonstrates a greater interest in the symbolic qualities of the painting as mirror.

It also poses important questions of subjectivity and objectivity.

It has been argued that the mirror in the early-modern English imagination does not herald the birth of the individuated subjective self. The object viewed in the looking-glass is seldom the self – as is true of this section of Marvell’s poem – and there is no reflection of the viewer or sense of their subject-position or ‘subjectivity’ [1]. Instead, it is a device for correction and upholding Aristotelian values of humility.

To those ends, Marvell’s mirrored representation penetrates directly into the private conscience and dilemmas of engagement and withdrawal.

Yet, instruction is not the sole or singular purpose of these images. The densely appropriated vitrification signifies objectivity here. The ‘multiplying glasses’ with the multivalent ‘cataracts’ and concluding sea show a clouded reflection to have enveloped the atmosphere, a distinction not lost in subsequent stanzas:

How can an accurate, universal or identifiable representation of the world be created when viewpoints are shaped and obscured by personal politics, personal ethics and private conscience?

The poem resounds with the language of vision and orientation, speaking beyond the speaker through history, genealogy and topography.

The liminal boundaries between sight and vision – one man’s meadows being another man’s mirrored art – is formed through contours and what have been termed ‘illumination edges’ [2]: shadows; reflections of the sparkling ‘polished’ grass; and ‘discontinuities in reflectance’ through clouded lenses and imaginary floods. 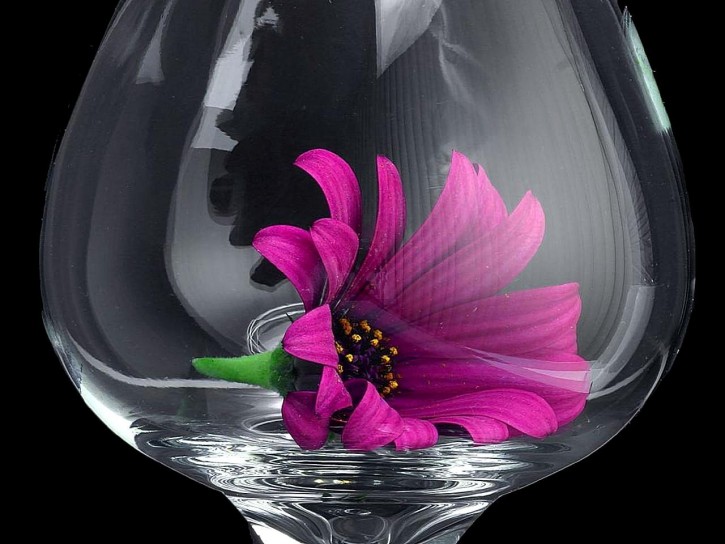 Subjectivity does emerge, however, in the second key area of reflection in the poem: the entrance of Mary Fairfax, Marvell’s teenage tutee at Fairfax’s estate.

The momentary luxury briefly enjoyed by the narrator before her arrival resonates through reflection:

It ev’rywhere the meadow holds;
And its yet muddy back doth lick,
Till as a crystal mirror slick;
Where all things gaze themselves, and doubt
If they be in it or without.
And for his shade which therein shines,
Narcissus-like, the sun too pines.

Beset with murkiness and shade, the ‘illumination edges’ here become associated with the superficial and unnecessary pleasures that must be forsaken at Mary’s entrance.

We see ‘shadows’ transform a ripple to a ‘horror’ upon the water surface (665-671), while the ‘viscous air’ and ‘jellying stream’ (673-675) unsettle the distinctions between clarity and obscurity as the process of vitrification begins.

Maria such, and so doth hush
The world, and through the ev’ning rush.
No new-born comet such a train
Draws through the sky, nor star new-slain.
For straight those giddy rockets fail,
Which from the putrid earth exhale,
But by her flames, in heaven tried,
Nature is wholly vitrified.

Like a sorceress, Maria’s appearance diminishes the poet’s meagre power to frame one single ‘landskip’ of polished grass by vitrifying nature in its entirety.

Maria, rather than the mirror itself, is the corrective force, for ‘only she’ can retract the cataract and restore the clouded reflection to its ‘crystal-pure’ state (692-693).

On the one hand, Marvell’s physical surroundings and his own means of self-expression are exposed as transparent, with implications of the superficial. On the other, they are mediated by an enforced reflection which forces a subject-position, which takes his use of reflection to (apparently) new levels.

Vitrium and the specular as tropes in Marvell’s poem add a dimension of selfhood found more commonly in visual art. A man who sees a reflection of God’s power – as witnessed perhaps through Maria’s ‘flames, in heaven tried’ – enters ‘a new experience of subjectivity’ [3].

Both Marvell, and his patron, led through the visual experience of the poem, must encounter the clearest picture of dilemma and doubt as reflected in their own literary and personal privacy.

These original notes formed an early basis for the contribution that was later published as ‘”The Genius of the House”: Andrew Marvell’s Private Lord Fairfax’, in Andrew Hopper and Philip Major (eds.), England’s Fortress: New Perspectives on Thomas, 3rd Lord Fairfax (Ashgate, 2014), ch. 8.