My latest work on Andrew Marvell and ekphrasis (derived from the Paragone to Encounter conference, 2013) explores several ways in which the poet negotiates the transition between text and visual object to further his personal and political poetics. 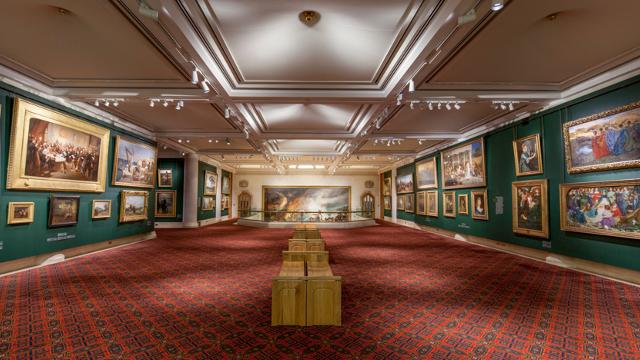 The late-seventeenth century saw new scientific developments (fronted by the Royal Society) and a vast communicative interchange between media that came to define political propaganda between the English and the Dutch.

Marvell, a poet who thrived on innovation as much as imitation, embraced the increasingly eclectic visual strategies afforded by these movements to depict the complexities of his human subjects.

There’s the use of prosopopeia in 1653, when he wrote two Latin poems to accompany a portrait of Oliver Cromwell to Sweden. We also find frequent use of glass and reflection, as Marvell seeks diverse visual encounters to suit his verbal ambiguity and weighty dilemmas.

There have been few attempts to place the work of Marvell within debates about ekphrasis. This is rather surprising, given how works such as ‘The Gallery’ explore the paragonal opposition between word and image that has become a fixture of ekphrastic orthodoxy.

The recent attempt to do so by Katherine Acheson remains firmly in the traditionalist camp. She states that Marvell’s verse ‘makes the claim conventional to ekphrastic poetry: that poetry is superior to painting’. [1]

However, more recent ekphrastic debates now demand that we move beyond these binary oppositions and seek more from the idea of representation. [2]

Marvell’s visionary poetics is ideally suited to this revisionist approach. He undergoes a heuristic enquiry into the relative merits of writing and art, whilst cleverly undermining paragonal traditions and the idea of representation at large.

In ‘The Gallery’, Marvell creates hybrid works of art to reflect a broader transition in artistic taste and style. The speaker summons an accomplice, Clora, to critique a private gallery that depicts an internalised representation of the soul.

Clora come view my soul, and tell
Whether I have contrived it well.

The silent Clora assumes the same receptive position as the reader – she’s following the narrative instructions just as we are. She’s led through the story of two double-sided portraits, which embrace contrasting traits: of taunting seductress and sublime divinity.

Here thou art painted in the dress
Of an inhuman murderess;
Examining upon our hearts
Thy fertile shop of cruel arts:
Engines more keen than ever yet
Adornèd tyrant’s cabinet;
Of which the most tormenting are
Black eyes, red lips, and curlèd hair.

But, on the other side, th’art drawn
Like to Aurora in the dawn;
When in the east she slumb’ring lies,
And stretches out her milky thighs;
While all the morning choir does sing,
And manna falls, and roses spring;
And, at thy feet, the wooing doves
Sit pèrfecting their harmless loves.

Here, it is difficult not to be drawn to Valentine Cunningham’s article, ‘Why ekphrasis?’, in which he ponders the fundamental problems that the discipline explores. The ‘pointing at an allegedly touchable, fingerable, thisness’, seems exactly how this encounter is established. [3]

The dramatic monologue addresses the complicated problem of real presence that writing can struggle to accommodate. We get demonstrative pronouns and verbal gestures, granting Marvell’s creation the physical properties of a touchable (even rotatable) object.

We might be reminded of Browning’s ‘My Last Duchess’, with its similar demonstrative emphasis: ‘That’s my last Duchess hanging on the wall, / Looking as if she were alive…’

The paintings that Marvell designs for us may be authentic but are presented through familiar guises.

Aurora, for example, resembles ‘The Sleeping Venus’ (c. 1510) by Giorgione. ‘Slumb’ring’ depicts the comfortable poise of the reclining figure, while the creamy skin emphasised by Marvell contrasts with the red lips and scarlet drapery.

Equally, though, we may detect ‘Venus of Urbino’ by Titian, who is assumed to have completed Giorgione’s painting after his death.

In Titian’s painting, Venus lies awake in the foreground as two maids rummage through a chest in the background. Her tilted head and faint smile carry hints of seductiveness, though not quite enough to suggest that her innocence is lost.

Marvell was fixated by the boundaries between innocence and experience, particularly the transition of female form to womanhood. Such paintings would have offered a fascinating perspective.

Given that critics are now sensing a more promiscuous Maria (13 years old) in Upon Appleton House, one imagines that an image such as Titian’s carried more potency than could be exercised in words. [4]

Other poems in Marvell’s canon such as ‘The Nymph Complaining’ show innocence to be demonstrably obliterated. Here, the poet preserves a guise of innocence in one side of his portraits (a note of promiscuity notwithstanding) and complements it with experience and wantonness on the reverse.

The double-sided artwork allows Marvell to separate the Platonic ideal of beauty and the unbridled nature of carnal human desires whilst retaining them as part of the same object. The paintings that inspire the poem, it seems, strive to contain both simultaneously.

From Paragone to Encounter

Marvell’s conception of art and its environment reflects the distinctly private relationship he had with his poetry as a whole.

The new domestic surroundings in Titian’s painting aptly reflect the precarious balance of enclosure and exposure shown by Marvell’s sharing of a distinctly private encounter.

By inviting the reader into the soul, the only authentic witness is the written word. And, by combining the unobservable soul with familiar images, the poem makes us engage with the visual encounter whilst keeping us sufficiently distanced from it.

But the narrator’s choice of signifiers, ‘Aurora in the dawn’ and ‘Venus in her pearly boat’, ensures that the art object carries familiar enrapturing pleasures rather than purely fictitious ones. Thus, the poem is recreating visual phenomena as visual phenomena rather than as something that is designed to be outshone by words.

It’s Marvell’s private encounter that grants writing authority, but art must also retain its own sovereignty while it is staged within its own unique privacy.

These poems, and several more
Of thee, my summary dost store…

I wish to dedicate this post to a fabulous friend of mine, who began a journey into ekphrasis with me during undergraduate days in Bristol. The sister arts have since taken us our separate ways! Thank you for all your encouragements, dear Katty Pearce of the Guildhall Art Gallery.