Péti began by suggesting that Milton has been regarded as an agelast, a character that rarely or never laughs. Laughing, where it does occur, is seen as sardonic or even apologetic. But humour is prevalent through Milton’s epic, as shown by the joking between God and Satan and several instances of derision throughout the poem.

To Péti, Milton’s representation of laughter has a Classical, and especially Homeric, precedent. Elements of Milton’s approach to laughter allude to the Iliad, where, in Book 16, an ambiguous insult of diving is framed within the complimentary context of dance and choreography, and in Book 8, Zeus’ admonition is followed by a swift rebuttal, as he claims he is not acting seriously.

Only in Homer do we see the same complexity between deity and child as we do in Milton’s Paradise Lost, Péti argued, and it is through laughter that we may get another sense of the “intangible Homeric quality” identified by Davis Harding in Milton’s epic.

Cockcroft descibed smiling as multifaceted – something that can invite sympathy or exclude others from it. Smiling and its variants appear 27 times throughout Milton’s epic, Cockroft said, as he explored whether Milton’s purified vision of smiling could satisfy as much as Italian sources such as Tasso and Dante.

Through smiling, Milton places emphasis on endearment, firstly by dividing the glance and the smile between Adam and Eve, and secondly by differentiating between the loveless smiles of harlots and the purer delight of something more wholesome.

Milton alludes to Tasso, he says, at beauty’s ‘powerful glance’; when Adam smiles at Eve, we see a rational controlling of his delight at her. When Eve becomes the first to lose sovereignty to delight, we question why the smile is given to the bough of fruit she is carrying – a reminder that empathy is not fully incompatible with uneasiness.

Ultimately, we move from a state where, at Adam’s awakening, all things smiled, to one where, as Browning would later state in his Italian-leaning dramatic monologue, all smiles stopped together.

The afternoon papers were more divergent, though the first, on ‘Error’ in Paradise Lost, maintained a link to Classical (and Homeric) traditions.

Men called him Mulciber; and how he fell
From Heaven, they fabled, thrown by angry Jove
Sheer o’er the crystal battlements…
Dropt from the zenith like a falling star,
On Lemnos the Aegean Ile: thus they relate,
Erring; for he with this rebellious rout
Fell long before…

This passage, which is derived from Book 1 of the Iliad and the expulsion of Hephaistos, began Joe Wallace’s exploration of what error means historically, and how it impacts the aesthetic in Milton.

Wallace (Birmingham) drew upon pagan responses to Christian theology, in addition to seventeenth-century ideology from John Selden and others which associated polytheism as synonymous with every kind of error imaginable. For Milton, Wallace says, history might be approached as a sequence of systems of knowledge. Thus, the greatest punishment that could be bestowed upon someone is ignorance or otherwise the inability to process that knowledge.

For his readers, Milton may have sought to present history as a series of errors to be corrected. (Was Spenser in any way Milton’s model for thinking about error?) We find a hint of Milton acting as a critic of the Classics, and looking to the past for recovery from error.

The final paper of the day came from Liam Haydon (Kent) on the ‘Corporate’ Milton. The corporation, which centred around trade, established a firm link between the economic and the political, as national and international commerce increasingly governed the national interest. Corns and Campbell, Haydon points out, embellish the elder John Milton’s passion for music, but less so his potential interests in business, which could have influenced the poet during his upbringing. (“Guilty!” said a humoured Gordon Campbell.)

The cityscape of London had become configured around corporate ideals, something that becomes partially reflected in Milton’s Heaven, where the angels constitute an ideal of the virtuous body politic and corporate imagery instructs the state of affairs. What we see in the middle books of Paradise Lost is the language and organisational structures of heavenly corporation.

and all the Spirits of Heaven
By him created in their bright degrees,
Cronwed them with glory, and to their glory named
Thrones, Dominations, Princedoms, Virtues, Pwoers,
Essential Powers; nor by his reign obscured,
But more illustrious made, since he the Head
One of our number thus reduced becomes,
His laws our laws, all honour to him done
Returns our own

So, where we might expect to see scepticism from Milton relating to commence and economic activity, instead we find support for the ordered and expansionary appeal of the corporation, which provided the ideal infrastructure to promote the spread of civic virtue. 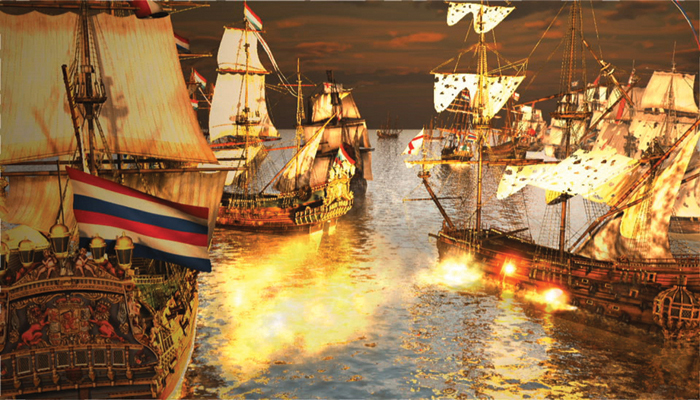 One issue arising for me from the final paper was the rhetoric of repair, as England’s proud commercial powers continued to wane.

Though we cannot identify trade as the sole cause of the first Anglo-Dutch War in 1652, it almost certainly suffered as a consequence of it.

In the early 1660s, following the imposition of a further Navigation Act, the Earl of Carlisle embarked upon an ambitious embassy to Muscovy in a bid to secure ties with Eastern Europe. When relations broke down, desperate attempts were made to broker deals in Scandinavia – though the process may have been hastened by escalating tensions with Holland and the imminent threat of a second war, which prompted a swift (and eventful) return.

The impact of this (if we choose to ascribe any at all) depends upon when Paradise Lost was written.

Campbell and Corns describe the poem as ‘underway’ by the late 1650s and possibly ready for print by early 1665. Andrew Marvell certainly witnessed the poem prior to writing his Last Advice to a Painter in 1667, but that hardly brings us closer to a definitive answer.

If we are to imbue Paradise Lost with ‘corporational’ structures, the time of composition will surely influence the degree to which Milton was contrasting England’s fractious trade and foreign policy with his depiction of a constitutionally progressive Heaven.